skip to main | skip to sidebar

How Does Lenticular Printing Work? 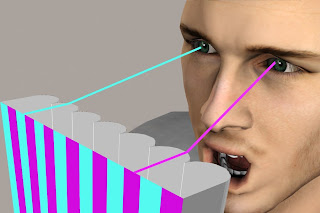 A Very Simplified Illustration - The cyan stripes represent View 1 and the magenta stripes View 2. Most lenticular prints are made from anywhere between 10 - 30 views. (It was too much work to make even 10 stripes per lenticule)

Lenticular prints work by taking a series of captured or rendered views (usually between 8 and 24) and interlacing them to form one very high resolution image. The interlacing software takes the multiple camera views (or frames) and slices them up into many vertical strips and then basically collates these strips putting one strip from each view under each lenticule (see image above). When you view the final print the lenses will present each eye with a different view creating a 3D image.

Some combinations of effects are also possible, for example 3D with a flip or animations of color and sometimes small motions. Personally, I've found that motion is often too distracting on a 3D image.
Posted by Peter J. Sucy at 10:03 AM

Notes from the Digital Workshop

Peter J. Sucy
Hamlin, NY, United States
I entered the digital world in late June of 1984 with the purchase of one of the original Macintosh 128K computers. Seeing the salesman lasso the image of a sneaker and move it around the screen sold me in a flash.

Here was creative tool of revolutionary proportions! The graphical interface and digital data manipulation would dramatically change the way we communicate, photograph, create music, draw, paint, design products, cars and buildings, and affect nearly every other aspect of our lives today.

As a member of Kodak's Electronic Photography Division in the mid to late 1980's I used my Macintosh and the brand new desktop publishing tools to create hundreds of new product proposals. My goal was to try and impart my vision of a digital future and ultimately turn the digital imaging tools I fantasized about into our current reality.